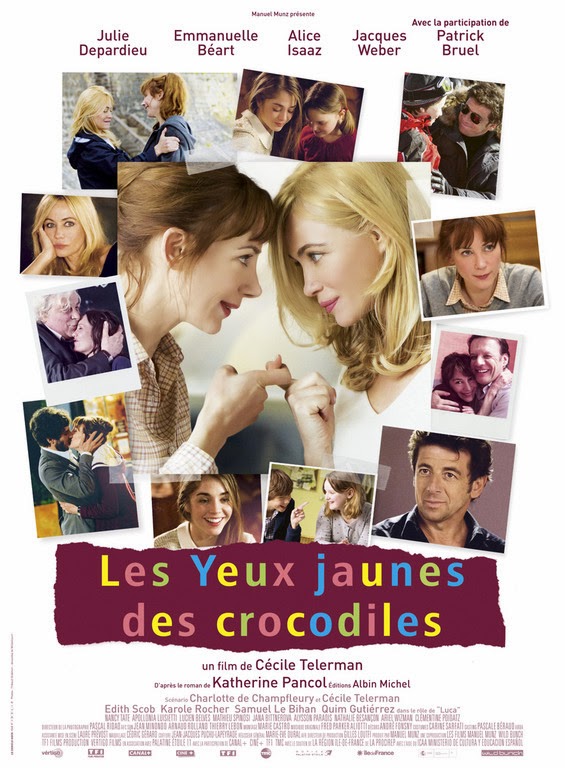 Well, after a really fast bike ride to the cinema, even risking my life through the traffic in Place d'Italie to get to the 19h05 session of Her (USA, 2013), we get there at 19h00 to find out that, surprisingly enough, every seat is taken (except 4 or 5 in the first row and separated one from each other). So, we decide to watch this film, The yellow eyes of the cocodriles.

I must say it was a quite nice surprise. I mean, I had already heard of the book (by Katherine Pancol. It's the first novel of a trilogy followed by The Turtles' Slow Waltz and The Central Park Squirrels Are Sad on Monday Mornings), but I had no clue about what this film was about. I was happy to find an interesting story, through which characters evolve, and which also encloses several surprises.

What is it about? Here you have a little synopsis: This film deals with two sisters, one of them, Josephine, has just been dumped by her husband, she has a difficult relationship with both, her older daughter and her mother, who continuously looks down on her. She also has confidence issues and a lack of self esteem. Iris, the second sister, on the other hand, is rich, beautiful, intelligent, everyone knew she was going to make it to the top. Her life seems perfect and complete but, as a writer, she's suffering from writer's block.

The real story begins when Iris asks Josephine to write a book for her. That way, both get what they want, Iris gets success and renown, Josephine gets the money she needs to overcome her current financial situation.